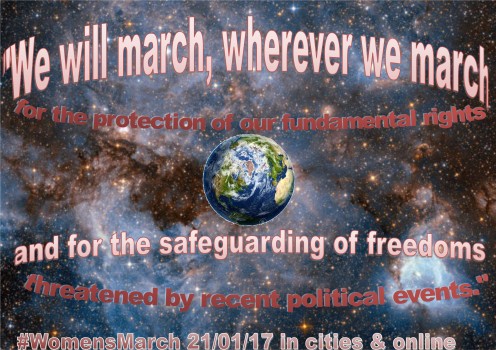 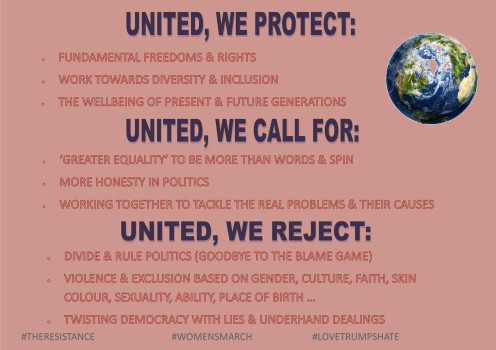 It has been a long time since I’ve posted on this blog for various reasons. (I will leave these until other posts.) I am inspired today to share two poems and some images regarding the various marches happening to say no to hate and dare I say it stupidity playing out in politics today. I will let the poems say most of the rest. I must however, mention that this blog is in place of marching because my health and mobility levels do not allow me to physically join in the protest. A wonderful woman in her 60s with dual citizenship of America and Britain and her friend are marching carrying mine and others’ names with them. It is her first protest march. It is really her kindness that lifted me to write and share these poems. She and her friend have made hats to represent people who cannot be there and she plans to share my poems on a blog post I will link this to.

A big shout out to all those who rose today

Marching for democracy, for political honesty,

They who, in solidarity, get in fascists’ way

By demanding greater fairness and equality,

Taking to streets and tweets to have their say,

No one should suffer violence, exile, shame

Place of beginning, that’s all a blaming game,

While my body stops me from being with you there

Another still conveys me, she holds my name

Written in her pocket, merged with the hope in me,

We walk beside you, though our footfalls you won’t see,

Side by side together, folk and cities we can’t name

Linked this day and after, to help deal with what may be

Thousands next to thousands, so many now awake,

No time to be demure now, time to write our herstory

For dignity, survival and for our shared future’s sake.

“Does it always have to be so early?

“Jump in the shower while you can.”

“Text to see what time it ends.”

“This waterproof no longer fits,

What happens when it rains?”

“I’ve nearly gathered all the kit.”

And we’ll all be jammed up close”

“Have you seen the bloody thermos?”

“Hurry, or we’ll miss the bus,

You’ll never walk in those!”

“I’ve made some sarnies for us.”

“Should we bring some spare clothes?”

“Have you found the first aid tin?”

“I’ve got tissues for your nose”

“Make sure that the dog’s back in”

“Make sure that window is closed”

“Some others just get up and go!”

“Stay close to people that we know”

“Do you think we’ll make the news?”

“Tick tock, the coach will be there”

“They’ll be thousands, have you heard?”

“Which of the placards shall we take?”

“Don’t you forget that banner now”

“The coaches are here! So many, wow!”

“You’re kidding, this was my day off!”

“I’m fed up with this sodding state!”

“The police can get really rough.”

Hi, how are ya both doing today?”

“I can’t believe we need to protest this same shit

But will ‘til my teeth fall out, maybe still then too”

“Who last cleaned this coach’s loo?”

And so an army rises and prepares again to fight,

Thousands of early morning lights against the night,

Coaches carve across a union heaving at the seams,

All around the globe, people unite against the violence,