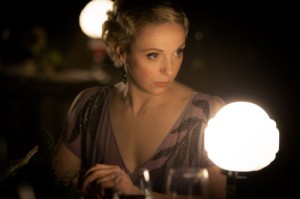 In the last of my posts on popular fiction for a while I offer an exploration of Mary Morstan / Watson / AGRA. Soon it will be back to the poetry and interfaith / peace work. (At present doing the latter is enough and writing about it postponed)

So Mary is an alias and she is an assassin of surgery-honed precision who loves her husband very much. In spite of shooting him she gains Sherlock’s trust too. What do we know of Mrs. Watson? The clues I find as always are in the words; the poetry. We are given the initials AGRA.

The city AGRA was central to the original story The Sign of Four upon which this series of Sherlock draws inspiration. In Conan Doyle’s Sign of Four within the walls of Agra Fort was hidden treasure linked to Mary Morstan / Watson. In our modern interpretation Mary’s secrets are revealed behind the walled façade of a house on Lester Street. She later gives John Watson a pen-drive with the initials A.G.R.A, telling him it contains her history.  John later throws the pen-drive in the fire just before all lose consciousness or leave the scene except a drug specialist with skills of deduction. Mycroft will wake. It is left  at Sherlock’s parent’s house. Sherlock has threatened national security. Anyone who follows a good who-done-it knows that evidence thrown into the fire is rarely completely erased. The vaults of Appledore, or the mind of Charles Augustus Magnusson (CAM) also hide the mystery of AGRA.

For what it is worth I believe Mary Watson’s story will play on in Series 4. She is a linguist with a history she runs from. I still believe that there was more to the connection between Magnusson and Mary. His initials are the same as Mary’s father from the original story and the telegram at the wedding goading Mary, calling her poppet and saying if only her family could see you now suggests more backstory than has been divulged so far. He also keeps referring to her as ‘bad girl’. Something tells me he has been or seen himself  in the role of father figure to Mary, a twisted paternity based on ownership and control. One she left to be more the romantic, bread baking, cat loving, guardian reading part-time nurse of Sherlock’s initial analysis.

We are told Mangusson’s reach is the western world and beyond. It is not too far of a stretch to believe he had been pulling strings that influenced her former employers and her work as an assassin. Nor would it be a stretch to believe she would choose to end this cycle. Sherlock himself has told us the universe is rarely so lazy to fall into coincidence. A.G.R.A  is also an acronym for The Association of Genealogy and Researchers in Archives.  There is probably nothing in this but it sparks possibilities for future exploration. We know nothing of Mary’s birth name or family except this enigmatic acronym. We still don’t know why and how she met John. How does an assassin become a part time nurse? If it is interesting enough to be banked in the archives of a Napoleon of Blackmail we will hear more.  We still don’t know the name of the child to come. I vote ‘Pearl’, not because it is a favourite at all, but because Mary was sent pearls in the original story and the Sherlock writers reference the canon with names.

What’s in a name you may ask. Would a rose by any other name smell as sweet? Clair De La Lune is a perfume made up for this episode. It may reference a fragrance by Cartier called De Lune. Beyond this it links to a French folk song . The song alludes to a French version of the Commedia Dell’Arte  in which Pierrot is the moonstruck one (also known as Pedrolino). He is the zanni or comic companion and the character who plays unmasked. Pierrot also links to the other unmasked player; the Inamorato or lover.  Harlequin is the French version of Arlecchino – witty, anarchic, charismatic and a wearer of masks, forever hungry.  Then there is the unnamed lady; the Inamorata in the song. I like to think there are similarities in the trio to Sherlock, John and Mary. An unknown singer on an early recording of the human voice sings a small snippet of Au Clair de la Lune digitalised only a few years ago.  The word archivist in me likes this. Archetypes of human stories are bought into the age of information and digital pen-drives. I felt it appropriate to end with a translation of the last verse of Clair De La Lune.

By the light of the moon

One could barely see

The pen was looked for

The light was looked for

With all that looking

I don’t know what was found

But I do know that the door

Was shut behind them.